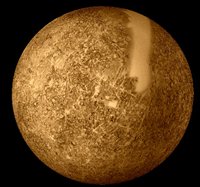 1. Mercury is the smallest planet in the Solar System.

3. Mercury has no atmosphere and no known satellites, perhaps because of its proximity to the Sun.

5. The first visit to Mercury was a flyby made by the Mariner 10 spacecraft in 1974.

6. Mercury is often identified with the Greek god Hermes, the messenger of the gods in Roman mythology.

8. A day, from sunrise to sunrise, on Mercury is equivalent to 176 Earth Days.

9. Mercury is the closest planet to the sun, the maximum distance from the Sun = 70 million km (43.5 million miles).

11. Mercury is known as a terrestrial planet consisting of about 70% metallic and 30% silicate material.

12. First it was Copernicus who noticed orbiting planet in the early 16th century; and then Galileo was the first to observe Mercury during the 17th century.

14. The surface of the planet is covered in craters much like those seen on Earth’s moon. This is a sign that Mercury has been geologically dormant for billions of years.

15. Since Mercury’s orbit is within Earth’s orbit, it can be viewed from Earth in the early morning or the late evening, but never in the middle of the nighttime.

16. The planet makes three complete rotations on its axis per every two orbital revolutions.

18. Mercury is the second densest planet after Earth.

19. The Hubble Space Telescope cannot view Mercury. This is because Mercury is too close to the Sun and the brightness would harm the electrical components of the telescope.