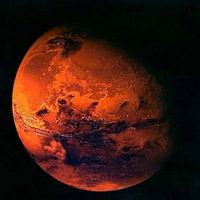 1. Known as the Red Planet, Mars is characterized by its red, dusty landscape.

12. Asaph Hall discovered both of Mars’ moons, Phobos and Deimos, in August 1877.

17. Phobos, one of Mars’ two moons, is gradually getting closer and closer to Mars. It is believed that it will eventually collide with the planet.

18. The surface of Mars is covered in canyons and valleys. This leads scientists to believe that the planet once had water on it.

19. Just like Earth, both of Mars’ poles are blanketed in ice.

20. Of all the volcanoes in the Solar System, Mars has the tallest. It is named Olympus Mons and it stands at 15 miles high, or three times that of Mount Everest.