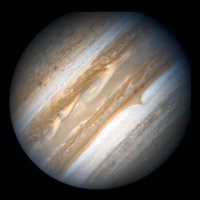 6. Jupiter, sometimes called Jove, was the King of the gods in Roman mythology and the son of Saturn.

9. Pioneer 10 was the first spacecraft to explore Jupiter in December 1973. Pioneer 10 just did a flyby.

10. Jupiter has sixty three moons or satellites, eight are regular and 55 irregular.

12. Voyager 1 provided the earliest and clearest photographs of Jupiter on January of 1979.

13. Jupiter has rings, the third planet discovered to have a ring system in our Solar System.

18. The rotation of Jupiter is the fastest of any planet in the Solar System, making its days only 10 hours long.

19. The large red spot on Jupiter is actually from a storm that has lasted over 300 years.

20. Jupiter’s largest moon is the biggest in the Solar System. Named Ganymede, it is larger than the planet Mercury.