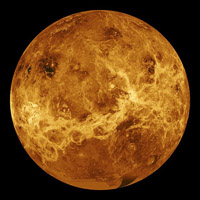 2. The interior of Venus is composed of a central iron core and a molten rocky mantle, similar to the composition of Earth.

3. The surface of Venus is very dry with flat plains, highland regions, and depressions.

4. Venus is the sixth largest planet in the Solar System.

5. Venus is the second closest planet to the Sun.

6. Planet Venus is named after the Roman goddess of love and beauty.

7. The atmosphere of Venus is primarily composed of carbon dioxide (96%) and nitrogen (3%), with traces of other gases and little to no water vapor.

8. Similar in size, density, and mass, Venus and Earth often referred to as sister planets.

11. Minimum distance of Venus from the Earth is 40 million km (25 million miles)

12. Venus is the hottest planet in the Solar System.

13. Venus is one of the brightest objects in the sky, next to the Sun and Moon.

15. The surface of Venus may have been formed by a lot of volcanic activity. It is said to have 167 volcanoes that measure up to 100 km across.

17. The rotation of Venus is so slow that it travels around the sun quicker than it can make one rotation on its axis. This means that Venus has a longer day than it does a year.

18. Aside from planet Earth, Venus is the most explored planet. Many space probes have visited and landed on Venus to gather data.

19. The clouds surrounding Venus are comprised mostly of sulfuric acid.

20. Studies point to the fact that Venus used to have water on it, but it dried up as the sun started letting off more energy.

21. Venus and Uranus are the only two planets that rotate from East to West.

22. Venus has a mountain named Maat Mon that is more than 5 miles high (26,400 feet). Originally a volcano, scientists are not sure if Maat Mon is still active.

23. Venus has an atmospheric pressure that is 92 times that of planet Earth.