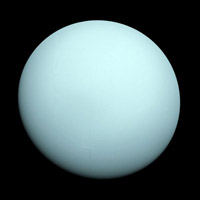 1. Uranus is named after the Greek god of the sky. Uranus was the husband of Gaia, the goddess of the Earth.

2. It was discovered in December 13, 1781 by William Herschel, a German-born British astronomer.

5. Uranus is the third largest planet in the Solar System.

6. The atmosphere of Uranus is composed of hydrogen, helium, and methane. The methane in the atmosphere absorbs red light, giving the planet a blue-green color.

7. Uranus is considered unusual because the planet is tipped on its side. The poles actually point towards the Sun. This is due to the fact that its magnetic field is tilted 60 degrees from the axis of rotation.

8. In 1986, Voyager 2 visited Uranus, until then, little was known about this planet.

9. Like Venus, Uranus spins from east to west, which is opposite from the spin of Earth.

14. The 27 moons of Uranus are named after characters created by William Shakespeare and Alexander Pope.

15. William Herschel identified Titania and Oberon in 1787, these are the first two moons of Uranus that were discovered.

19. Uranium, the chemical element, is named after the planet Uranus by Martin Heinrich Klaproth, a German chemist, in 1789.

20. Due to the fashion in which it spins, portions of Uranus can have nights that last over 40 years.

21. Uranus is the coldest of the planets even though Neptune is located further from the Sun.

22. The planet is the second least dense after Saturn.