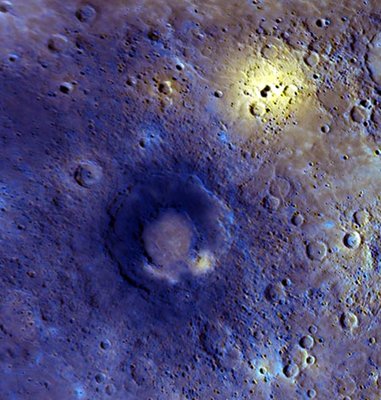 Mercury is the smallest planet in the Solar System. Its radius is a mere 2,439.7 km. It is so small that the moons of other planets such as Ganymede and Titan are larger than Mercury. Despite being the smallest planet in the Solar System, Mercury is denser than any of the larger gas giants such as Neptune, Uranus, Jupiter or Saturn. This is because Mercury has a solid surface while the other planets are usually made up of different gasses. Because Mercury is so close to the sun, it is almost impossible to see it without the aid of a telescope.

At 5.427 g/cm³, Mercury has the second largest density in the Solar System. It is only slightly denser than Earth. Its density is the biggest thing in common that Earth and Mercury share. Mercury’s mass is considerably smaller than that of Earth’s. Because of this the pull of gravity from Mercury is considerably lighter than that of the pull of gravity on Earth. Mercury’s gravity is only a third of how strong Earth’s gravity is. If someone who weighs a hundred pounds on Earth steps on Mercury his weight would drop down to 38 pounds. While you are still kept on its surface the amount of force needed to do things would be lesser. Mercury’s mass is 3.3022 × 1023 kg or around 0.055 Earths.

42% of Mercury’s volume is said to be made up of its core. Earth’s core makes up a mere 17% of its volume. It is said that Mercury’s core is molten just like that of Earth’s.

Comments - 9 Responses to “Mass and Density of Mercury”