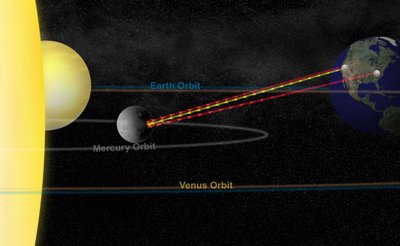 The planet with the most eccentric orbit in the Solar System is Mercury. The eccentricity for the planet is 0.21 and its distance from the sun ranges from 46-70 million kilometers. It only takes 88 days for Mercury to orbit around the Sun at 47.8 km/sec (29.7 miles/sec). A typical year on Mercury would take 88 Earth days. Because of Mercury’s ever changing distance from the sun and its 3:2 spin-orbit resonance the temperature on Mercury’s surface is complex and varied.

A day in Mercury is twice as long as a year in Mercury. One solar day lasts 176 earth days, which is almost twice its orbital period, which means that one year is half a day. The axial tilt of Mercury is 0.027 degrees. This is the smallest axial tilt in the solar system with Jupiter coming in at second.

In some parts of the surface of Mercury, the sun rises halfway then sets again and then rises again. This happens is equivalent to one day in Mercury. The reason for this is that four days before perihelion, the angular orbital velocity of Mercury is equivalent to its angular rotational velocity. The apparent motion of the sun stops. When perihelion occurs the rotational velocity is less than its angular orbital velocity. After four days, the sun’s apparent motion will return back to normal.

Comments - 12 Responses to “Orbit and Rotation of Mercury”