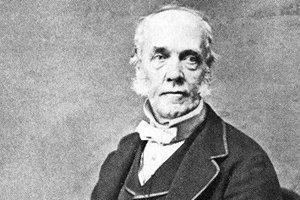 If there is a recurring theme among astronomers, it is their love of mathematics. Does this mean they also love to count money? Apparently, for one particular astronomer, yes it does! It should come as no surprise that William Lassell is not only an astronomer, but a merchant as well. Though accomplished and famous astronomers would call Lassell an amateur, he is known for several discoveries, namely, the moons of Neptune, Saturn, and Uranus. Yes, he discovered Neptune’s Triton; Saturn’s Hyperion; and Uranus’ Ariel and Umbriel. It certainly is an understatement for someone who has craters on the Moon and Mars named after him. Not only that, but a ring from Neptune, too!

A year shy from 1800, William Lassell was born into taking over the family business after his father’s death. Probably having earned much from the beer business, he builds his own observatory. Apparently, the stars were calling to him. He was fascinated with mirrors and telescopes; and he even maintains those personally! Lassell, having had a beer brew business and an observatory, must have caught Queen Victoria’s attention. She met him specifically during a visit to Liverpool on 1851.

Deciding that England was restraining his potential for more observations, he went to the Mediterranean and built himself a telescope there. By 1849, he was awarded the Gold Medal of the Royal Astronomical Society. A few years later, he sat as its president, most probably humbling anyone who thought he was just “amateur”. To put the cherry on top of his wonderful resume, he wins the Royal Medal on 1858.

After years of enjoying the wonderful view, Lassell returned to England and settled there until his death. Once again, he leaves more than just his exceptional contribution to astronomy, but a large sum of money behind. The Royal Observatory in Greenwich received his very own telescope as a reminder.

Comments - No Responses to “William Lassell”