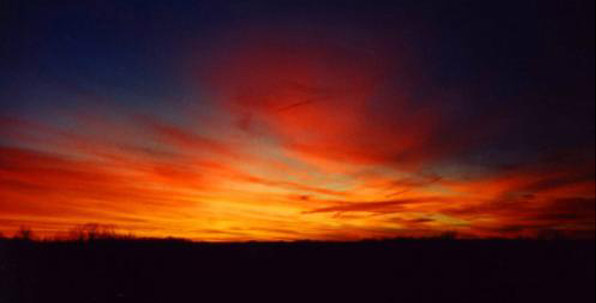 Sunsets are usually associated with the color red and in some cases, can be seen with a tinge of orange. Why is the sunset red? Sunlight is composed of various colors of light, with each carrying a different wavelength. As the Sun sets, more red colored light is scattered towards the direction of the Earth compared to say, blue or green because of aerosols in the lower levels of the atmosphere.

So why then is the sky not red when the Sun is directly overhead? This is because at sunset, or even sunrise, the light emanating from the Sun negotiates a longer path through the lower levels of the atmosphere where there is a heavier concentration of aerosols. The distributing effect of the aerosols is then magnified resulting to scattering of more red light than any other color.

The process of diverting light of varying wavelengths can also explain why the color of almost everything we see is, is so. Green grass, for example, reflects more green light than any other colors of light. That is why it is seen as mostly green.

Following are some other information about the Sun that may help understand how it works.

Energy – The Sun is made up mostly of hydrogen which it constantly burns, creating very intense heat in the process. Burning up 4 million tons of hydrogen every second produces tremendous light and heat. To simulate this and generate the same amount of energy on earth will mean blowing up as much as 100 billion tons of dynamite every second.

Life Cycle – Just like any other star, the Sun undergoes several stages in its life cycle. At this time, the Sun is a main sequence star or a young star still in the process of burning up its internal supply of hydrogen. Once it runs out of oxygen to burn, it will turn into a red giant. At this stage, its core will sink while the surface grows bigger and bigger until it swallows the Earth and the entire solar system. However, this will all happen in a few billion years’ time.

Comments - No Responses to “Why Is the Sunset Red?”