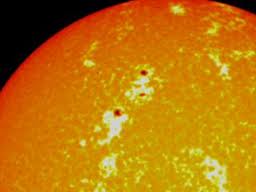 Most pictures of the Sun depict it as a yellow heavenly body. The primary reason why the Sun appears yellow is the fact that it is made up of gases such as hydrogen and helium along with other elements like sulfur, magnesium, carbon, neon, iron, oxygen, nickel, chromium and calcium. The interaction of these elements caused by the nuclear fusion and collision of their ions makes the surface of the Sun reach temperatures to about 10 000 Fahrenheit. The very hot temperature of its different layers makes the Sun to have white color. The scattering of light particles in the earth’s atmosphere when the Sun is gazed from earth gives it yellow color.

The scattering of light particles is also the same reason for the colors of different objects around us. When light particles enter the atmosphere, blue light is filtered giving the sky its very cool blue color. Most of the red light particles are left which at times appear yellow when we look at the Sun. At sunset more blue light is scattered than normal making the Sun appear darker in shades of red or orange.

A theory associated with light scattering is the human eye’s interpretation of the light seen. When light is scattered and strikes the retina of the eyes, it gets processed by the visual cortex and sends signals to the brain which then tells that the Sun’s color is indeed yellow.

Different animals have different eye structures. Some animals do not have eye cones like humans do. Due to this, other animals might interpret the Sun’s color in shades of grey because their retinas have black-white sensitive rods instead of the eye cones. Other animals such as dogs and cats have some level of color blindness, so when they look into the Sun, it might not even appear as yellow.

Comments - No Responses to “Why Is The Sun Yellow?”