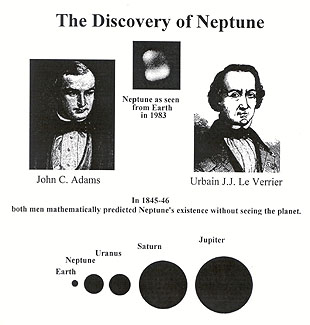 The fourth biggest planet in the Solar System, Neptune is named after the god of the sea, Neptune, from Roman mythology. Neptune is one of the three planets that were not visible to the human eye; the other two planets are Uranus and Pluto (now classified as a dwarf planet). Unlike the other five planets, Neptune, along with Pluto and Uranus, were not discovered during the pre-historic period. Basically, this means the discovery of the planet was due to scientific inquiry.

The discovery of the planet’s existence took numerous studies and astrological observations. First off, there’s Alexis Bouvard, the French astrologer who hypothesized that there is a planet after Uranus. Bouvard observed the Uranus and noticed some motion irregularities. In a nutshell, the motion of the planets can affect one another due to various factors—and the motion of Uranus suggested that there was something affecting its movement. This gave birth to his hypothesis. Before him, however, Galileo Galilee actually saw Neptune, although he mistook it for a fixed star.

The actual discovery, then, is credited to two astrologers, John Couch Adams of Britain and Urbain Le Verreir of France. Both pursued the hypothesis independently, with Adams sending his observations to the Royal Astronomer George Airy and Le Verrier publishing his estimates. Airy asked James Challis of the Cambridge Observatory and Le Verrier urged Johann Gottfried Galle of the Berlin Observatory to find the planet according to their calculations. The discovery was also made independently. Because the discoveries were made individually, there was a furor over the credit. The scientific community then decided to give the credit to both Adams and Le Verrier.

Comments - 10 Responses to “Who Discovered Neptune”