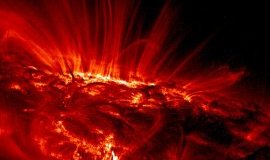 This is one of the most common questions thrown to astronomers and scientists. Many of us know that our Sun is a star and a star’s final moment is through a very powerful explosion known as a supernova. This is such a very dreadful scenario; however, the Sun will not experience the same fate as that of the other stars. But how is this possible if the Sun is also a star?

Mass is the deciding factor if a star will explode at the end of its life cycle. To qualify for a supernova ending, the Sun should have a mass that is four times its current mass. Fortunately, its mass will remain unchanged until its end. The Sun has a relatively low mass, thus it is classified as a dwarf star. If it is not going to explode, how it is going to end its life?

Astronomers and scientists predict that in about 5 billion years, the Sun will be depleted of its hydrogen fuel. By that time, the Sun’s gravity will still be powerful to enable the continuous fusion reactions in its core. However, the helium will be turned into carbon, oxygen and nitrogen. Although this is the very same process for a supernova explosion, the Sun does not have enough mass to support an explosive fusion reaction in its core. What will happen is that the Sun will just blow off its outer layers leaving a carbon rich white dwarf core. It will cool down over billions of years until it reaches the very same temperature as with the universe.

Other astronomers theorize that in about 5 billion years, when the Sun has depleted its hydrogen fuel, other gases will be out of control, especially the helium, which shall make all objects here on Earth to melt down and burn.

Comments - 5 Responses to “When Will The Sun Explode?”