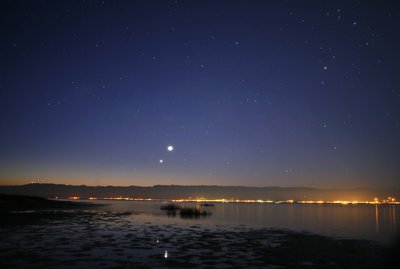 Venus, the second planet from the sun, is named after the Roman god of beauty and love (in Greek mythology, Venus is known as Aphrodite). Perhaps the planet was named after the god because of how it appeared on Earth. Bright and very visible, Venus is easily the brightest object in the sky at night—next to the Moon, of course. Because of the visibility, the people from the pre-historic times have known that Venus existed. And since the discovery happened before recorded times, there is no data that can say when this bright planet was exactly discovered.

The Babylonians provide the earliest record of observing this planet at around 1581 BC; the Persians in 1032 made a record of the Transit of Venus. Given the designation of the “morning star” & “evening star”, the Greeks had initially thought that these were two separate stars when in fact it was only one.

Mercury, Mars, Jupiter, and Saturn are also visible through the naked eye, making them planets just like Venus—discovered during the pre-historic times. Venus was actually the “morning star” and the “evening star.” The people back then didn’t know that the morning start and evening star is, in fact, just one object.

However, there are recorded early objections on the planet, observations that even pre-date the ones made by Galileo Galilee and Nicolas Copernicus (the one who first saw the planets through a telescope and the one who hypothesized that the planets revolve around the Sun, respectively).

Among the first correct Venus observations was that of Pythagoras’, the Greek philosopher credited for the Pythagorean Theorem (a mathematical—specifically a geometrical—concept). Pythagoras observed that the so-called morning and evening stars were in fact the same. Meanwhile, Avicenna, a foremost Persian philosopher, observed that Venus is not closer to the Sun but to the Earth (an observation that isn’t true, as everyone knows).

Comments - 40 Responses to “When Was Venus Discovered”