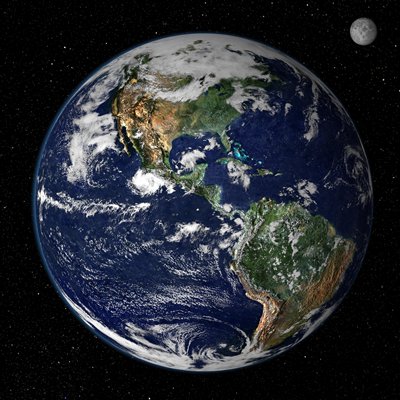 Also called the Blue Planet (due to its color when seen from outer space), the World, and Terra (a Latin term), the Earth is the third planet from the Sun. As any elementary school student could tell you, from that order, the Earth is preceded by Mercury and Venus. And as you may have surmised the moment you gained conscious of the world, Earth is the home to humans and millions of other species—the only planet in the solar system and the universe where life exists, or at least from what is known.

Earth is more than four billion years old. One would think that the Earth was “discovered” the moment humans inhabited the planet. Of course, it’s not really possible to truly discover the Earth. However, it took a while before humans actually became conscious of Earth as a planet. In fact, humans may have learned of the existence of Mercury, Venus, Mars, Jupiter, and Saturn first before they realized that Earth is a planet.

It was only during the 16th century when humans perceived Earth as a planet. Earlier than this, however, the Egyptians and the Sumerians observed and surmised that the planet may be spherical—contrary to the prevailing Modern World belief that it is flat. Of course, it was Copernicus during the 16th century who discovered the truth: the Earth isn’t flat and isn’t the center of the solar system (he actually had an assumption that there is no actual center to the universe). In a way, it was Copernicus who first discovered the real nature of the planet or at the least the discovery closest to the planet’s real nature.

Comments - 39 Responses to “When Was Earth Discovered”