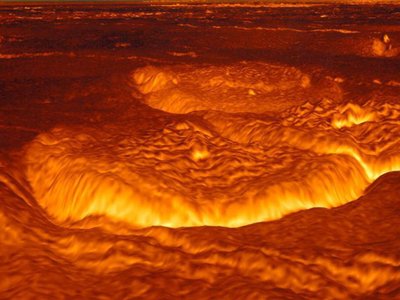 Referred to as the Earth’s twin, Venus is indeed quite similar to our own planet when it comes to composition except for a few significant differences. First off, its total diameter is only 650 km less than that of Earth’s and its mass is about 81.5% of our planet. It is also classified as a terrestrial planet and is the brightest object in our skies right after the moon. In fact, it reaches its maximum brightness shortly before sunrise or right after sunset thus earning it the name Morning Star or the Evening Star.

Of all the terrestrial planets, Venus has the densest atmosphere of all and it is composed of carbon dioxide, because of the fact that it has no carbon cycle to help put the carbon back into its rocks and surface features as well as lacking the organic life to absorb it.

Scientists believe that a younger Venus used to have oceans that are similar to the Earth’s but have since totally evaporated as the temperatures in the planet continuously rose thus leaving it pretty much desert-like, dusty and dry. The water is believed to have dissociated and since the planet lacks a magnetic field, the hydrogen was then swept into space by solar winds.

The planet, after being mapped by Project Magellan in 1991 and 1992 showed extensive volcanism as well as sulfur in its atmosphere which indicates some recent eruptions. Venus also has a few impact craters which shows that the surface of the planet is still pretty young, roughly half a billion years old.

Comments - 42 Responses to “What is Venus Made Of?”