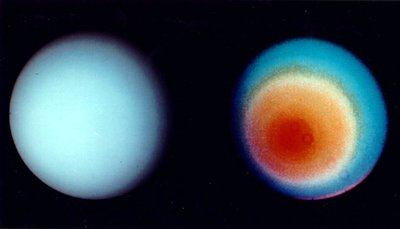 The ice giant Uranus is certainly different from other gas giants such as Jupiter and Saturn, which are both mostly composed of helium and hydrogen. Uranus is composed, mostly of various ices such as methane and ammonia. Its mass has been approximated at 14.5 times that of Earth. Astronomers believe that 9.3 and 13.5 Earth masses of this are actually comprised of the aforementioned ices. Hydrogen and Helium can only account for roughly 0.5 to 1.5 Earth masses leaving the rest of the material found in Uranus to be rocky compounds.

It is believed that the seventh planet has three different layers inside it. The rocky core in its center, the icy mantle that surrounds it and the outer gas layer made up of helium and hydrogen. The planet’s core is comparatively small compared to others and is only half the mass of our own planet. Uranus’ largest layer would be its icy mantle. Contrary to what most people think, this mantle isn’t exactly made of ice but is instead; made up of hot dense fluid which is comprised of ammonia, water as well as various other substances. In fact, most astronomers refer to Uranus’ mantle as the water-ammonia ocean.

Just like other giant planets, Uranus also has a ring system, numerous moons as well as a magnetosphere. However, the Uranian system is quite unique in terms of configuration because the planet’s axis of rotation is turned sideways which is nearly into the plane of its revolution around the sun. Observed weather changes in the planet often reach its peak as the planet approached its equinox.

Comments - 9 Responses to “What is Uranus Made Of?”