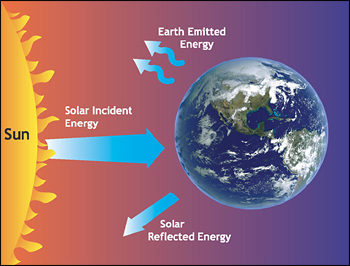 Radiation is a form of energy transmitted in rays, particles, or waves. Almost all energy that the Earth uses for its consumption comes from the Sun. This energy travels through space by radiation. Solar radiation, therefore, is the energy, specially electromagnetic energy, that the Sun gives off.

The Sun produces energy through nuclear fusion at its core, where tremendous amounts of energy are released by the fusion of nuclei into more massive nuclei under extreme conditions such as extreme pressures and temperatures. An example of this would be the conversion of Hydrogen nuclei into the much heavier Helium. The nuclear reaction causes neutrinos and photons to be discharged. Radiation is basically the travel of photons from one neighboring atom to the next, where it will be absorbed and re-emitted, over and over again until it can be released into outer space.

This energy is transferred from the core to the photosphere through the convection zone. The photosphere, or the radiating surface of the Sun, is where the energy will be radiated into space. Electromagnetic radiation are mostly emitted here, though sometimes small amounts of microwave, radio, and X-ray emissions can also be emitted. A typical photon journey lasts about 100,000 years from the core of the sun to its surface, while it will take a photon from the Sun’s surface only eight minutes to reach the Earth.

Solar intensity can be measured by the Inverse Square Law, where the intesity of radiation hitting or striking objects, such as planets, asteroids, or dust, in space can be quantitatively assessed. The total energy given off by the Sun is very high, owing through the tremendous energy released by nuclear fusion. Scientists put the energy output at 63,000,000 W/m2 (watts per square meter).

With the distance of the Earth from the Sun, and due to the intercepting atmosphere, this figure is definitely much lower. Radiation in the outer atmosphere amounts to approximately1,367 W/m2. Of these, only about forty percent will reach the surface of the Earth.

Comments - 8 Responses to “What is Solar Radiation?”