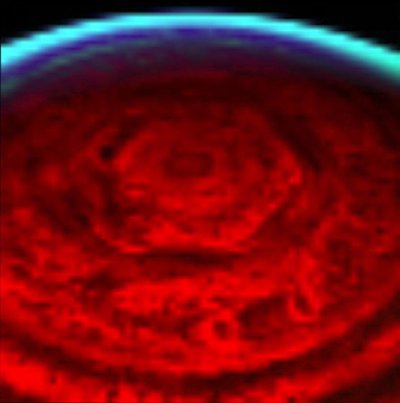 Much like its contemporary Jupiter, Saturn is made up of mostly hydrogen. In fact, this element composes 96% of the planet whilst the remaining 3% is made up of helium and the remaining 1% would be trace amounts of various other chemicals. Scientists believe that this composition matches the primordial elements that were already present during the formation of our Solar System.

Just like the other planets, Saturn can be divided into different layers as you descend further down into the planet. The topmost part would be the cloud layer, which is the most familiar as we have seen it in various images of the planet. This is made up of ammonia crystals and right below the clouds are water and ammonium hydro-sulfide.

Underneath this cloud layer, pressures can rise so much that it reaches the point wherein hydrogen is compressed and turned into liquid nitrogen. Further down, this turns into metallic hydrogen. Astronomers believe that the interior of Saturn is actually composed of rock and metal elements that sank down to its center during the formation of the planet itself.

The planet’s atmosphere may appear bland to most, although there are long-lived features that are quite distinct on it. Saturn also has one of the most prominent ring systems which are composed of ice particles as well as dust and rock debris. There are 61 known moons that orbit this planet. But there are also hundreds of moonlets weaving their way through the rings. In fact, one of Saturn’s moons, the Titan, is larger than the planet Mercury and is the only one in our Solar System that possesses a significant atmosphere.

Comments - 13 Responses to “What is Saturn Made Of?”