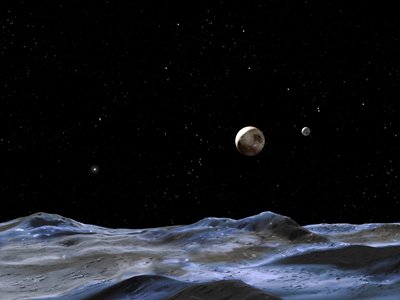 Pluto may no longer be considered a planet, but it will always be one in people’s minds. It is a good thing that Pluto is located in the colder and darker outer Solar System because if we were to bring it into the inner Solar System, it would turn into a kind of comet and blast out particles and gas from the solar wind. What is Pluto made of that would make it act this way?

Planetary scientists were able to calculate that Pluto’s density is somewhere between 1.8 and 2.1g/cm3. Through this information, one would be able to calculate that the former planet’s interior must be made up of 50-70% rock and 30%-50% ice. There are also decaying radioactive elements within it that would heat the dwarf planet’s interiors thus allowing both rock and ice to continuously move around.

From what scientists know, the dwarf planet’s interior is perhaps a rocky core that is then surrounded by a shell of ice. If the aforementioned radioactive elements are still in a continuous state of decay at the moment then this could potentially heat Pluto just enough to make its interior seem like a liquid ocean that is comparable to Jupiter’s Europa.

Pluto’s surface is made up of a thin layer of nitrogen, carbon monoxide and methane. When Pluto draws a little closer to the sun, these materials evaporate and subsequently form an atmosphere that surrounds the dwarf planet. The very opposite occurs when it becomes cooler and moves further away from the heat of the sun. All these elements freezes up and then falls back down to its surface.

Comments - 6 Responses to “What is Pluto Made Of?”