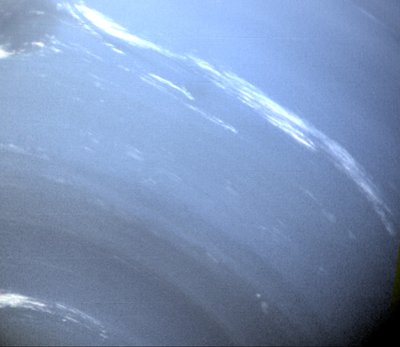 Neptune, just like the other gas giant planets in our Solar System, can actually be broken up into different layers. In fact, its composition can change depending on which layers you’re looking at. Shall we go and learn more?

The outermost layer of the 8th planet is its atmosphere, which comprises around 5-10% of the entire planet’s total mass. Its atmosphere extends up to 20% to its core and is made up of about 19% helium, 80% hydrogen as well as trace amounts of various ices that includes, ammonia, methane and water ice.

Beneath the planet’s atmosphere lies its significantly large mantle. This is a liquid region wherein temperatures can reach a staggering 2,000 k to 5,000 k. It also contains about 10 to 15 times the mass of our own planet. Scientists believe that it mostly consists of ammonia, water, methane as well as various other compounds. Despite the fact that its mantle is really an extremely hot dense fluid, astronomers refer to it as being icy.

In Neptune’s very center is its core. This is made up of iron, nickel as well as various other silicates that make up around 1.2 times the mass of our own planet. Besides its startling blue color, Neptune is also one of the more notable planets that have very active and visible weather patterns. In fact, there have been recorded winds reaching as fast as 2,100 km/h in the planet and because of its great distance from the sun, it has been said that the planet’s outer atmosphere is one of the coldest places in our solar system.

Comments - 9 Responses to “What is Neptune Made Of?”