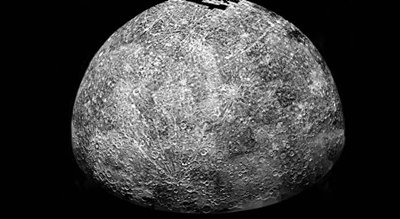 Mercury is the closest planet to the Sun and is also the smallest in our Solar System. It is also considered to be a rocky or terrestrial planets and its interior composition is said to be similar to that of our own planet. The planet’s core is actually made up of liquid metal which is then surrounded by a mantle that is composed of silica and a solid outer crust. In Mercury’s case, the core only accounts for about 42% of the planet. The Earth’s core, on the other hand, accounts for 17%.

As for knowing the actual composition of Mercury’s interior, it is still quite difficult to fully ascertain. Scientists do know that its density is about 5.427 grams per cubic centimeter which is only a little less compared to that of our own planet. This would mean that Mercury has a metal core and the rest would be rock.

Some believe that the planet’s core has the highest iron content when compared to other planets in our Solar System. There are also those that believe that Mercury used to have a composition that’s similar to that of a chondrite meteorite before it was struck by a planetesimal quite early in its history thus stripping away its outer crust and its mantle. What remained of the planet was much denser.

Until recently, astronomers were still unsure of whether the planet’s core was liquid or solid. They were able to confirm that it was indeed liquid by bouncing radio signals off of its surface thus causing a wobbling rate that is expected from a planet with a liquid core.

Mercury Pictures Beamed back to Earth

Comments - 21 Responses to “What is Mercury Made Of?”