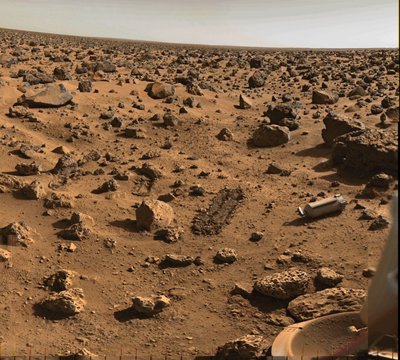 Known as the red planet, Mars is nearly half the size of the Earth. Its outer surface is composed of mostly basalt that was brought to the surface by ancient volcanoes, which were active during the planet’s early history. The volcanic activity in the planet stopped many years ago thus leaving its surface covered with iron oxide dust with such a fine consistency comparable to talcum powder. This also gives the planet its red hue. Dust storms also occur on the planet that blows the Martian dust around and slowly wears down the features of its surface. Planetary scientists believe that Mars has a core region which is nearly 1,480 km in radius and that it consists of mostly iron and 17% sulfur.

Its core is surrounded by a mantle that used to be active but has now settled into dormancy. This mantle is made up of silicates. If the planet’s core is liquid then its mantle is closer to the consistency of soft rock paste that is less dense than its core. This mantle is then covered by a crust which can vary in terms of thickness from 50 km to 125 km. This is comparably thicker than the Earth’s own crust which averages 40 km. As for its core, it is believed that the planet used to have a rotating one. However, because of its small size and complete lack of water, its activity seized billions of years ago.

So there you have it, information about the composition of the planet Mars.

Comments - 13 Responses to “What is Mars Made Of?”