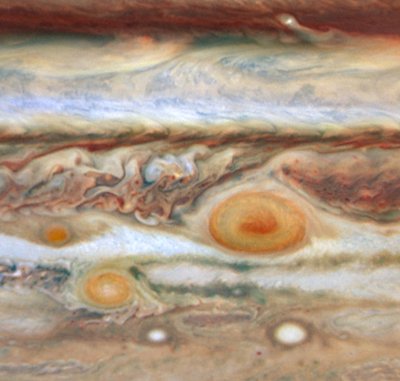 Jupiter, the fifth and largest in our Solar System is comprised mostly of helium and hydrogen. Since these elements are the very same stuff that we would find in the Sun as in other stars, many people often wonder why this planet is not classified as such. The explanation for this is simple; Jupiter is not big enough to be one.

Needless to say, for it to be considered a star, the planet would have to be 60 times larger than its actual size in order for it to generate enough gravitation force to initiate nuclear fusion. The heat and light that the planet generates comes from the heat that it has generated and compressed over time.

As for the planet’s composition, besides the aforementioned gases, one would also be able to find ammonia, water and methane mixed in. Underneath this layer of gases would be a layer of liquid nitrogen and right below that would be a mixture of both liquid and metallic hydrogen. This liquid nitrogen was produced by the staggering pressure generated by Jupiter itself. The planet’s inner core is comprised of iron and rock.

Jupiter is one of the four gas giants in our Solar System. They are referred to as such because of the fact that they are not primarily composed of solid materials. These gas giants are also often referred to as the Jovian Planets. They differ from other Terrestrial planets because they do not have a definite surface but instead have layer upon layer of materials that become progressively denser as your go further down.

Jupiter – The Largest Planet in our Solar System

Comments - 14 Responses to “What is Jupiter Made Of?”