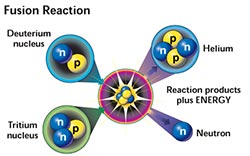 The Sun is one big nuclear fusion reactor. Nuclear fusion, where nuclei of atoms combine to form more massive nuclei along with a tremendous release of neutrinos and energy, has powered the sun since time immemorial.

Fusion reactions occur in the Sun’s core, which is kept in a gaseous state due to its temperature of 15 million kelvins. Reactions produce neutrinos, the by-products of nuclear fusion, and gamma rays, or photons with a high energy frequency.

The Sun is primarily made up of Hydrogen and Helium. Colliding nuclei, like those of Hydrogen, fuse together rapidly at high temperatures to form other heavier nuclei. The energy obtained from this collision equals roughly to 9 X 1013 Joules. Because Hydrogen nuclei have the same charge (they are both protons), it would be hard for them to fuse easily as stated by the rule “like charges repel like charges.” Fusion can only be possible under extreme conditions, such as high temperatures or high pressure, to overcome this repulsion. This is the reason why nuclear fusion occurs at the Sun’s core, its hottest part.

The first stage in the Sun’s nuclear fusion process would be the Proton-Proton Chain Reaction, where the nucleus of two hydrogen atoms fuse into a Deuterium nucleus. This Deuterium nucleus, which is an isotope of Hydrogen, will then undergo further processes to turn into Helium. The conversion of Hydrogen to Helium releases a lot of energy in the process.

Another type of nuclear fusion that occurs quite rarely in the Sun, but more often for other larger stars, is the Carbon-Nitrogen-Oxygen Cycle. Like in the Proton-Proton Chain Reaction, four Hydrogen protons are turned into Helium, but Carbon-Nitrogen-Oxygen act as catalysts. The resulting type of energy is still the same as with the Proton-Proton Chain Reaction. The CNO cycle occurs more often in larger stars than the Sun because of the higher temperature that it requires.

Comments - One Response to “What is Fusion Power?”