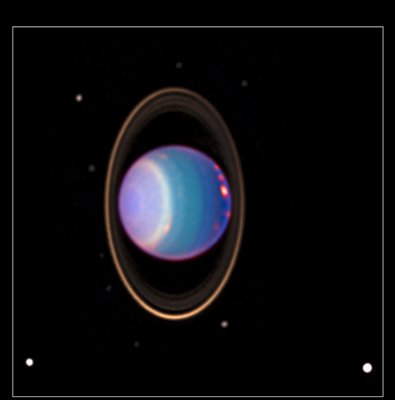 Uranus is the seventh planet that is farthest from the sun. It also ranks as the third largest planet in our solar system and the fourth ranker when it comes to mass. Despite its similar visibility when compared to the other five classical planets, ancient observers do not actually recognize it as a planet because of its slow orbit and dimness.

The planet Uranus is composed of features that are actually similar to that of Neptune and these two planets differ in composition from those of planets Jupiter and Saturn, which are considered as the larger gas giants. Neptune is basically composed of helium and hydrogen and contains high proportions of ice such as ammonia, methane and water in combination with other traces of hydrocarbons. It is considered to have the coldest atmosphere in our solar system having a temperature of at least 49k or -224 degrees celsius. Its cloud structure is complex and layered, having water to fill up the lowest clouds and methane for the uppermost cloud layer. The planet Uranus’ interior has ices and rocks for its primary composition.

Just similar to the other planets that are considered as giant, Uranus consists of a ring system, a number of moons and magnetosphere. Its configuration is unique from among the other planets because the rotation of its axis is tilted sideways near its plane of revolution in the sun. When viewed from the planet Earth, the rings of Uranus may sometimes appear to be circling the planet just like the target of an archery and the moons may be revolving around it just like a clock’s hands.