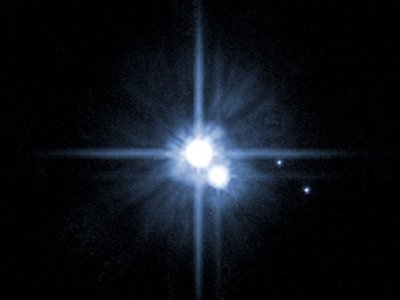 The planet Pluto is named after Hades, the mythological Greek god known as the ruler of the underworld. After gathering suggestions and experiencing several debates, the planet was named Pluto partly because it is very far from the sun.

The planet is perpetually dark. Another reason for its name is because PL are Percival Lowell’s initials, the man who theorized that another planet existed. The planet was discovered in 1930.

Pluto, when compared to the other eight planets in the solar system is smaller. It is even identified as the solar system’s smallest planet. It is considered as a dwarf planet in 2006. It usually orbits past the Neptune’s orbit.

Its composition is still unknown and its density has an indication that it contains a mixture of 30% water ice and 70% rock. Pluto’s atmosphere consists basically of nitrogen combined with methane and carbon monoxide.

The planet’s orbit is eccentric that brings it inside Neptune’s orbital path. Pluto has one satellite known as Charon, which has an estimated diameter of about 1200 km or 750 miles, resulting to the pair being closest in size compared to any other planet/moon combination.

As far as researches are concerned, Pluto has not yet been visited by any spacecraft and pictures taken from its surface are blurry. However, by the year 2015, a spacecraft known as New Horizons launched in 2006 by NASA will visit Pluto.