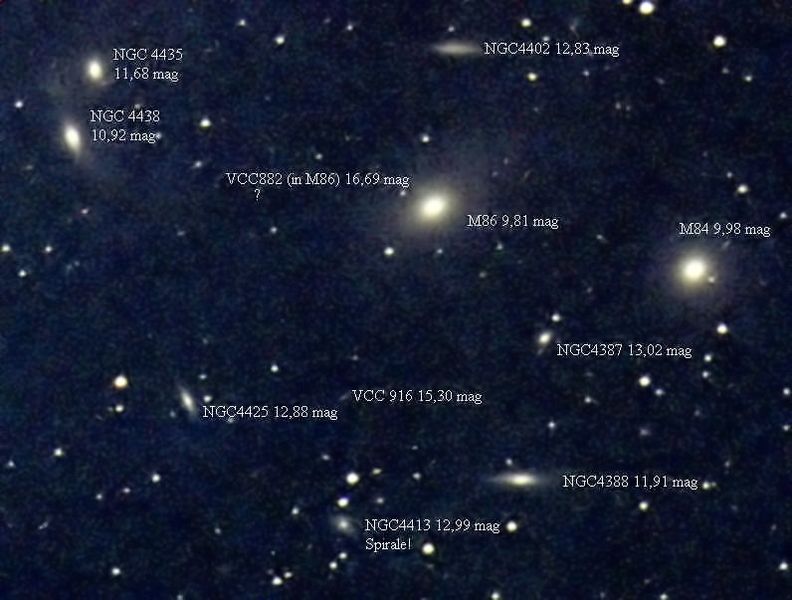 Virgo cluster is a group or clusters of galaxies in the universe. The cluster includes approximately 1,300 to 2,000 galaxies. Some are big while 90% of them are dwarf galaxies. These galaxies are attracted to each other by a common gravitational force. The Virgo cluster spans 15 million light years in diameter and as the name suggests, this group of galaxies is located in the Virgo constellation.

Charles Messier discovered the Virgo cluster in 1781. He described it as a cluster of nebulae seen only during a clear sky and near meridian. This cluster represents the center of the larger Virgo supercluster, which spans 110 million light years in diameter, and influences all other galaxies with its massive gravitational force. Milky Way galaxy, earth’s solar system is part of this supercluster. Because of this massive force, some galaxies near it revolve faster towards the center, creating greater mass. Still, some of these galaxies move at a fast rate within the direction of our own galaxy.

Virgo cluster is composed of a number of elliptical and spiral galaxies. Most of the elliptical galaxies are concentrated in the center while the spirals are mostly found in the periphery. One of the famous galaxies found in the Virgo cluster is the Messier 87 which is an elliptical galaxy. It is one of the brightest celestial objects that can be seen with a telescope. According to astronomers, this galaxy contains 2.7 trillion of mass which is enough to absorb other smaller galaxies.

Comments - No Responses to “Virgo Cluster”