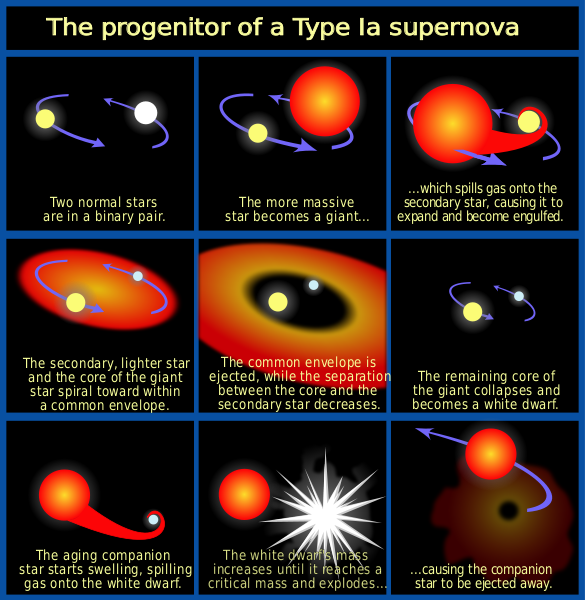 Supernovas are explosions towards the end of the life of a star. They are classified as supernova I and II, depending on their solar luminosities. Type I supernova has a peaked maxima (about 10 billion luminosities) and then gradually disappears. Type I supernova is further divided into Type Ia and Type Ib based on the spectra it emits. All type I’s do not have hydrogen lines. Here we will focus on Type Ia which shows a silicone line.

In the case of the type Ia supernova, a white dwarf in a slowly-rotating binary system (composed of two stars) can get more mass from its pair. Because of this, the limit is never achieved. The core of the star is left with increased temperature and pressure. When the star has approached to 1% of the limit, nuclear reactions occur that is not regulated by this kind of white dwarf unlike in other stars.

The core of the star becomes unstable and within seconds, the temperature peaks to billions of degrees, causing its particles to gain enough energy to dismantle the star resulting into a Type Ia supernova. When explosion occurs, it can be so bright that it can outshine other galaxies near it.

Comments - No Responses to “Type 1a Supernova”