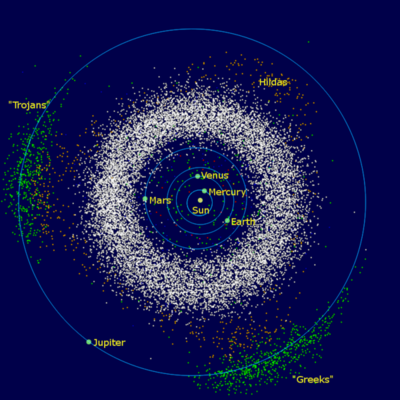 A Trojan, in Astronomy, is a minor planet or moon that shares an orbit with a larger planet or satellite but does not collide with the larger planet because while it orbits, it stays safely in what is called as the Lagrangian points. In theory, there are also Trojan planets that may reside at Trojan points.

Lagrangian points are five spots in any space where the gravitational pull of two relatively massive bodies, as in the case of a Sun and a planet are balanced out, making it possible for smaller bodies like moons, minor planets and asteroids to remain fixed, in essence, with respect to the planet. The smaller objects still move but they are locked into a synchronized orbit due to the gravities exerted by the two large bodies. Thus, collisions are avoided. However, only two of the five Lagrangian points located around 60 degrees of the planet at any point (L4 and L5) are stable and smaller objects and bodies tend to collect in the area. L1, L2 and L3, on the other hand are unstable, causing rapid object displacement.

The most popular Trojans in astronomy are those discovered around Neptune. They are so numerous that they are believed to be more than the asteroid count in the Asteroid Belt between the inner and outer planets. There are currently 6 known Trojans in the L4 point of the Neptune’s orbit. There are few identified Trojans because they are very faint as not only are they small, they are also too far from the Earth and the Sun. Studying Trojans help astronomers in understanding how planets and the planetary systems, such as the Solar system evolved.

Comments - No Responses to “Trojan”