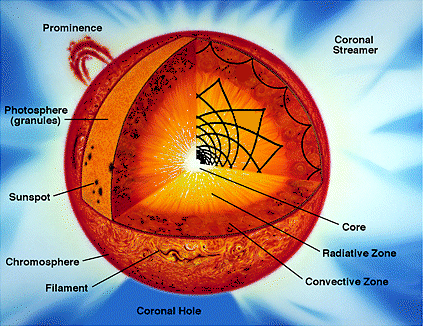 Nobody knows for sure how the Sun was formed. Scientists estimate the age of the Sun to be about one hundred to two hundred billion years old- about 80 billion years before the Earth was formed.

Scientists believed that an enormous amount of gases formed into a big ball which later created a star. In the course of time, many changes occurred which have made the Sun very different from what it was ages ago.

The center of the Sun, known as the core, is considered to be the hottest part due to the gases within that are continuously squeezed tightly. It is the only part of the Sun wherein the pressure is in its highest point. This is because in the center of the Sun, the gas hydrogen is fusing and mingles with helium in a certain process. This process is called nuclear fusion. Nuclear fusion is another way of releasing energy from the nucleus of an atom.

Instead of breaking the nucleus, the nuclei of a light element are put together, just like hydrogen to helium. The nuclei of a certain kind of hydrogen can be forced to combine. And as they combine energy, it releases heat, light, and other forms. Therefore, the Sun resembles an extremely large bomb that is constantly exploding.

The core is the only part of the Sun wherein hydrogen is being converted into helium to produce vast amount of energy in the form of heat and light. This heat and light is the one the Earth receives. It makes its way from the Sun’s surface and then into space. The light and heat we receive from the Sun is useful particularly when turned into energy that can power a variety of different things. Needless to say, this light sustains all of life on earth.

Comments - 3 Responses to “The Center of the Sun”