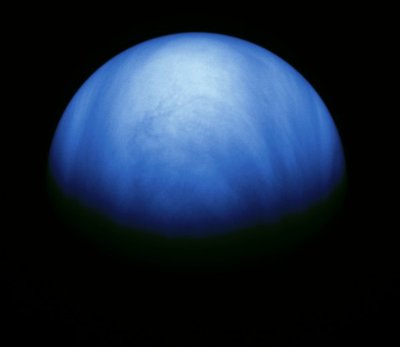 Venus’ atmosphere was discovered in 1761 by a Russian academician named Mikhail Lomonosov. The atmosphere of Venus is hotter and denser than the atmosphere of Earth. Its atmosphere is filled with clouds that are made up of sulfuric acid and is opaque in color. Because of this you cannot observe the Venetian Surface. Sulfuric acid rain is common on Venus but it never reaches the surface. This is because it evaporates before it touches the ground. This phenomenon is known as Virga. The main gasses that fill Venus’ atmosphere are nitrogen and carbon dioxide

Venus’ atmosphere circulates and rotates around its surface at a very fast rate. It takes the atmosphere four earth days to circle the planet. The winds that help rotate the atmosphere can go as fast as 100 m/s. The speed of the wind becomes slower when the surface decreases in elevation. Anticyclone-like structures known as polar vortexes are located on Venus’ poles. The Vortex has two eyes and is shaped like the letter S.

Venus does not have a magnetic field. What separates outer space and solar winds from the atmosphere of Venus is its ionosphere. Venus does have an induced magnetosphere. This is created because the solar magnetic sphere is excluded by the ionized layer. Solar wind blows lighter gasses such as water vapor by the magnetotail. It has been speculated that
Venus’ atmosphere was once similar to that of earth. Venus even had liquid water on its surface. The greenhouse effect is speculated to have evaporated the water and caused a rise in the greenhouse gases in Venus’ atmosphere. Venus’ upper atmosphere is the most similar to that of earth. Because of this coupled with the fact that oxygen and nitrogen exists in abundance in the planet, colonization is something that scientists may look into in the far away future.

Comments - 2 Responses to “The Atmosphere of Venus”