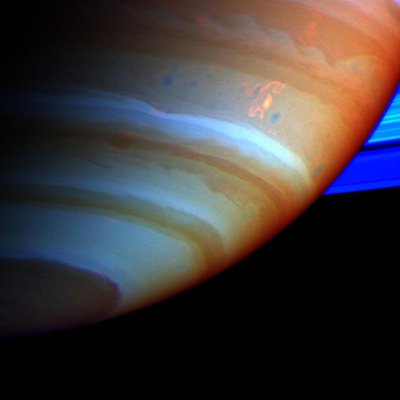 Saturn’s outer atmosphere is composed of 96.3% molecular hydrogen and 3.25% helium. The rest are made up of small amounts of acetylene, ammonia, phosphine, methane, and ethane. The clouds located at the upper part of Saturn are made up of ammonia crystals. The clouds located on the lower levels of the atmosphere are made off either h2o or ammonium hydrosulfide. Helium is notably deficient on Saturn.

Saturn’s atmosphere forms a banded pattern. Saturn’s winds are one of the fastest in the Solar System. According to the satellite Voyager, the winds can go up to 500 m/s.

Long-lived ovals have been observed on Saturn’s atmosphere. The Hubble Space Telescope found a large white cloud close to the equator in 1991 which was not seen in previous Voyager orbits. This is has been given a nickname, “Great White Spot.” Such a storm occurs once every year in Saturn. Take note that one Saturn year is equivalent to 30 Earth years. The most famous storm happened on 1933. The next storm is said to occur in the year 2020.

The Cassini spacecraft brought back images of Saturn. The images show its northern hemisphere as being bright blue in color. This color cannot be seen on Earth because it is being blocked by its rings. Rayleigh scattering is said to be the cause of the blue color. The polar vortex of Saturn is warm. This is a unique feature of Saturn and no other planet exhibits something similar to this. This is the warmest part of Saturn.

A hexagon shaped cloud pattern has been seen around the north polar vortex. It is still unknown as to why it is shaped that way. Astronomers think that a standing-wave pattern in the atmosphere causes it to be in that shape but some think that the hexagon shape is a novel aurora.

Comments - 6 Responses to “The Atmosphere of Saturn”