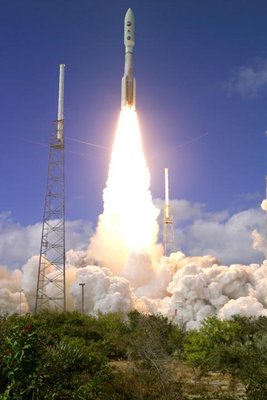 Pluto’s atmosphere was discovered from the Kuiper Airborne Observatory in 1985. It was observed through the occultation of a star with Pluto. If a planet does not have an atmosphere, the star would disappear immediately. But with Pluto, the star dimmed slowly. The atmospheric temperature of Pluto was discovered to be .15 pascals by measuring the rate of dimming of the star. The initial findings were further confirmed by another masking that occurred on 1988. Another revelation was studied on 2002 wherein the atmospheric pressure of Pluto was measured at 0.3 Pascal.

On 2006 it was discovered that there was ethane on Pluto’s surface. The ethane was created by the photolysis of frozen methane. The gas is then emitted into the atmosphere.

Because methane exists temperature inversion is common in Pluto’s atmosphere. The atmosphere is 36K warmer than 10km below.

Comments - 8 Responses to “The Atmosphere of Pluto”