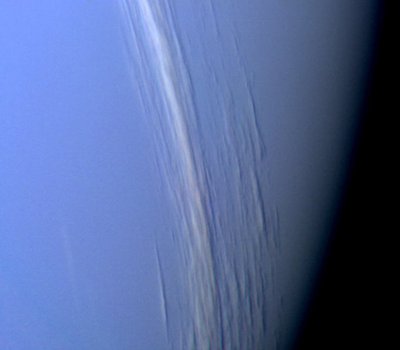 In high altitudes, the atmosphere in Neptune is composed of 80% hydrogen and 19% helium with a small amount of methane. At wavelengths above 600 nm, absorption of bands of methane occurs in the red to infrared parts of the spectrum.

Neptune is blue because of the absorption of red light by the methane in its atmosphere. It has a diameter of 49,500 km (30,764 miles) and estimated to be more than 3.9 times larger than that of earth.

However it is important to note that the same methane content exists in Uranus, and yet the hues of blue differ between the two planets. Neptune is the darker of the two. Neptune is said to have an unknown substance creating the darker blue color.

Neptune’s troposphere is composed of clouds that differ in composition based on the ranging altitude. Methane clouds fill the upper-level of Neptune. The temperature and pressure (below one bar) of that area is perfect for methane to condense. Pressures between 1-5 bars allow ammonia and hydrogen sulfide clouds to form.

If the pressure is more than 5 bars, ammonium sulfide, hydrogen sulfide and water clouds may form. Clouds of water-ice may form at 50 bars of pressure. The temperature in that area is roughly 0 degrees Celsius.

The lower stratosphere of Neptune is foggy because of the condensation of acetylene and ethane. There are also small amounts of hydrogen cyanide and carbon monoxide present in Neptune.

The thermosphere of Neptune is very high. It is around 750 K. Scientists haven’t figured out where the heat generates from as Neptune is very far from the Sun. Many theories have been suggested and have yet to be proven.

Comments - 11 Responses to “The Atmosphere of Neptune”