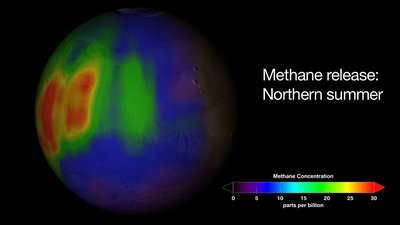 Mars’ atmosphere is thinner compared to that of earth. The atmospheric pressure on Mars depends on how high or low the land is elevated. On Olympus Mon’s peak, Its pressure is at 30 pascals (0.0044 psi) and in the lowest point of Hellas Planitia it can get as high as 1,155 pascals (0.1675 psi). Its average pressure would be 600 pascals (0.087 psi). The scale height of Mar’s atmosphere is around 6.8 miles (11 km).

Carbon Dioxide makes up the predominant gas in Mar’s atmosphere. It makes up about 95% of the atmosphere with other gasses like nitrogen composing 3%. Argon makes up 1.6% and the remaining percentages make up traces of water, oxygen and methane. The existence of methane has led some scientists to believe that some forms of life exist on mars. Dust fills the atmosphere so the sky above mars has a rusty color.

Evidence has been found to suggest that the atmosphere of Mars has changed over the course of a few billion years. The Mars Ocean Hypothesis even goes so far as to suggest that Mars was once made up entirely of water due to the current atmospheric pressure found in Mars today. At the moment only solid and vapor forms of water may exist on the higher parts of Mars. There was once a time when Mars was conducive to hold water but that changed due changing factors.

Comments - 5 Responses to “The Atmosphere of Mars”