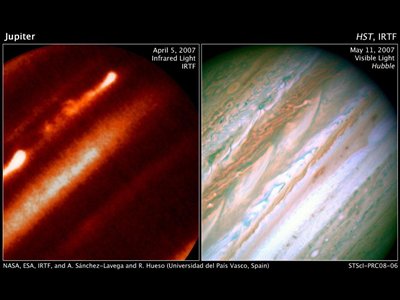 Jupiter’s atmosphere is the largest in the Solar System. Molecular Hydrogen and Helium make up most of its atmosphere as well as small amounts of ammonia, methane, hydrogen sulfide and water. Gases such as nitrogen sulfur, noble gas and oxygen can also be found in the planet. The gaseous part of the atmosphere slowly transitions into the liquid part of the planet. There is no clear division of the two.

There are four main divisions of the atmosphere: the troposphere, stratosphere, thermosphere and exosphere. The troposphere is the lowest level of the atmosphere. Its clouds are composed of ammonium hydrosulfide, ammonia and water. The ammonia clouds on the upper part of the atmosphere are visible in Jupiter’s surface. They are organized in such a way that they are parallel to the equator. They are kept that way by jets (winds) known as the zonal atmospheric flows. Belts are the dark bands while zones are the light ones.

Zones are cooler than belts. They are upwellings. Belts on the other hand are descending air. The zones’ are lighter because of ammonia ice. It is uncertain what gives belts its darker color. It is unknown where this kind of banded structure originated from but hypothesis have been formed such as the “shallow model,” and the “deep model,” to try to explain the phenomenon. These belts and zones along with the white and red spots that fill up the atmosphere, give Jupiter the “marbled” look it is so well known for.

Jupiter’s atmosphere is very dynamic. Lots of phenomena occur such as cyclones and anticyclones (vortices), band instabilities, storms and lightning. Storms are seen from the earth as large red, white or brown ovals. The Great Red Spot and the Oval BA are two of the largest red spots on Jupiter. These are anticyclones. White spots are smaller anticyclones.

Comments - 13 Responses to “The Atmosphere of Jupiter”