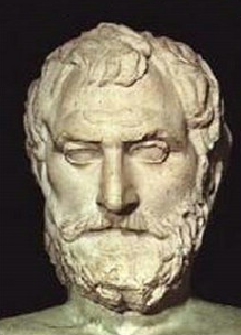 Thales lived around 580 BC in Miletus, Greece. Like many prominent Greek scholars, he was adept in not just one but many fields of knowledge. Thales was an accomplished mathematician, philosopher and physicist. In fact, he is often referred to as the “Father of Physics”, and he was one of the “Seven Sages,” Greece’s seven most acclaimed philosophers. Thales was also active in politics and education. But his main profession when he was alive was as an engineer.

One of Thales’ major accomplishments was being able to measure the height of the pyramids. He did this without using any sophisticated instruments, relying mostly on observation and mathematical analysis.

Given his analytic mind, Thales was able to introduce geometry to his fellow Greeks, after studying it in Egypt. Several geometric theorems being taught in schools today were presented by Thales. One of these is the theorem that states: when two straight lines intersect, the angles between them are equal.

In the field of astronomy, Thales impressed everyone by accurately foretelling a solar eclipse. In those days, it was considered a grand achievement, and rightly so. Solar eclipses were much harder to predict than lunar ones, and the people didn’t have calendars or the mathematical knowhow to predict important astronomical events.

Thales also made a name for himself when he introduced a method of navigation at sea using the constellations as guide. He demonstrated that ships can find their way by navigating according to the positions of the constellation Ursa Minor in the night sky.

But Thales was only human, and he was guilty of a few erroneous assumptions. For example, he believed that everything was made mostly of water. He believed that earthquakes happened because the earth was like a flat disc floating on a vast ocean of water. He tried explaining other natural phenomena based on his supposition that water made up all things.

Everyone knows now that the earth is not flat, and neither is water the main constituent of all things. But the way Thales thought started something very important. He is the first person known to make a rational and scientific attempt at explaining phenomena without the use of superstition or supernatural explanations. In effect, he helped develop the scientific method of investigation.

Comments - One Response to “Thales”