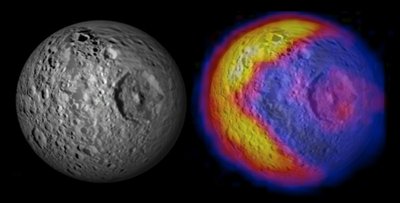 Saturn has long fascinated people because of the mystique of its rings, which circle the planet’s equator and make it one of the most visually beautiful sights in our Solar System. These rings are composed of bands of small water ice-coated particles and are 250,000 km wide but only as thin as a few tens of meters in some places. The origin of the rings remains unclear, although there are two main theories: that they are the remains of a destroyed moon or are remnants of the original nebular material from which Saturn was formed.

Saturn is a gas giant, meaning it is mostly composed of an upper layer of gases such as molecular helium and hydrogen surrounding a hot rocky core. Because of this, although Saturn is 95 times larger than Earth, its density is only 0.7 that of water. Saturn’s atmosphere is composed of some 75% of hydrogen and 25% helium along with small amounts of other substances such as methane and water ice. The planet is surrounded by clouds, with the upper layer composed of ammonia ice clouds and where temperatures can reach as low as -250° C. Below this layer is a lower deck of ammonium hydro-sulfate clouds, with average temperatures rising to -70° C. The lowest layer is made up of water clouds, and mean temperatures here are at the freezing point of water – zero degrees Celsius.

At the core, however, temperatures can reach as high as 11,700° C. Scientists believe that its great internal heat is due to the sinking of helium from the upper atmosphere through the liquid hydrogen at the interior. Like its neighbor Jupiter, Saturn also experiences powerful storms, although not as intense as those on Jupiter. Storms mostly appear around the bands that circle the planet, with winds at the equator reaching as fast as 1,800 km/hr, and can rage for months or even years.

Comments - 72 Responses to “Temperature on Saturn”