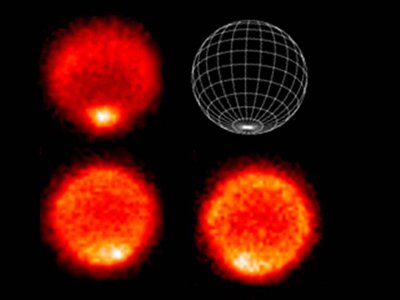 Now that Pluto has been demoted from a planet to a dwarf planet, Neptune is now the most distant planet in the solar system. It is 2.8 million miles from the Sun or 30 times the distance of the Earth to the Sun. Its distance has also made it, until recently, one of the most mysterious planets in our system. In fact, most of what we know about the planet comes from the Voyager 2 spacecraft, which passed by Neptune in 1989, although this has since been supplemented by ground-based and Hubble Space Telescope observations.

As expected, Neptune is one of the coldest planets in the solar system. The planet is an ice giant, meaning it doesn’t have a solid surface; its ‘surface’ is where the planet’s clouds meet space. At this point, the temperature of Neptune can reach as low as 55° Kelvin (or 50° above absolute zero) although the mean temperature of the planet is 73° K (-200° Celsius). However, temperatures at the South Pole are -10° C warmer than the rest of the planet because it is currently titled towards the Sun.

Once you travel down into the interior of the planet, the clouds condense into a liquid layer surrounding a central core made of ice and rock. At the core, in contrast to the surface, temperatures reach 7000° C, which is as hot as the surface of the Sun. The temperature differences between the surface and the core results in powerful wind storms, which can hit as high as 2100 km/hr, making them the fastest in the system.

The atmosphere of Neptune is composed mainly of helium and hydrogen, with large quantities of ice mixed in. Because of this, and increasing pressures and temperatures as you descend towards the core, some scientists have speculated that there could be a layer of the planet where there are vast oceans of water. However, conditions have to be just right and they may not yet exist on the planet until a billion years from now when Neptune is cool enough.

Comments - 35 Responses to “Temperature On Neptune”