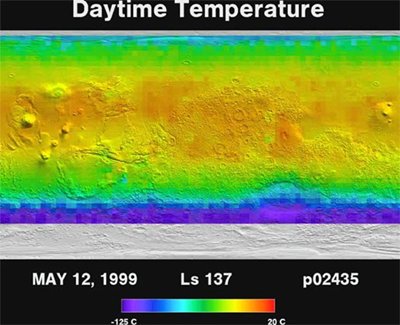 Speculation over the possibility of life on Mars has continually captured the imagination, as shown by the enduring popularity of novels such as War of the Worlds and the John Carter of Mars series, both of which have either been adapted as, or are set to be adapted as, movies. Unfortunately, the extremely cold temperature on Mars makes it highly unlikely that there is intelligent life on the planet – at best, life on Mars could be in the form of microorganisms. Average surface temperature on Mars is -63º C and can fall to as low as -140º C and as high as 20º C. In contrast, the coldest temperature ever recorded on Earth was -89.2º C and the hottest was 70.7º C.

The reason the temperature on Mars is so cold is that the planet is farther from the Sun than Earth and also has a thinner atmosphere that is unable to hold in the heat. Mars is 141 million miles from the Sun, while our planet is just 93 million miles away. The planet’s atmosphere is composed mainly of carbon dioxide with only trace amounts of other gases such as oxygen and nitrogen, and is only 1% as dense as that of Earth’s.

However, Mars was not always this cold. Astronomers believe that early in its history, Mars was an Earth-like planet with a wetter and warmer climate and bodies of water such as lakes and streams providing abundant liquid water. However, unlike Earth, Mars could not recycle any of its carbon dioxide back into the atmosphere and thus, could not sustain the greenhouse effect that made Earth livable. Despite the harsh conditions prevailing on Mars, however, the planet remains the best possibility for setting up self-sufficient colonies in the event the Earth ever becomes uninhabitable. More detailed exploration of Mars could also reveal vast untapped commercial possibilities to exploit, such as mining precious minerals like platinum and uranium.

Comments - 10 Responses to “Temperature on Mars”