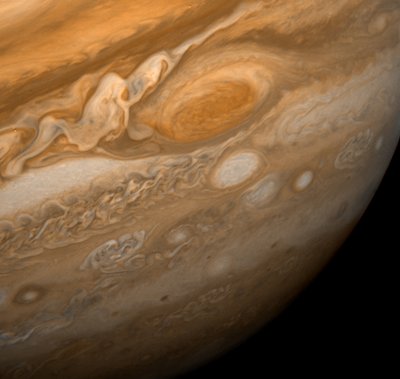 Jupiter was the king of the gods in Roman mythology, so it is appropriate that this was the name given to the largest planet in our Solar System. Jupiter’s mass is two and a half times all of the other planets combined. Its density, however, is only one-fourth that of Earth. The reason for its low density is because the planet is a gas giant, along with Uranus, Neptune and Saturn. Jupiter is mainly composed of hydrogen and helium, although it may also have a rocky core composed of heavier elements. Unfortunately, the lack of oxygen in the atmosphere makes it highly unlikely that there are large amounts of water on the planet, quashing hopes that life could be found there.

Jupiter sees a wide range of temperatures, from close to absolute zero at the outermost cloud layer to 36,000° Kelvin at the core. The high temperatures at the core are attributed to the extreme pressure of the planet bearing down at the center. At the inner layer of the clouds, temperatures can reach -145° C, while just above the core, where the planetary pressure has liquefied the hydrogen in the air, the temperature could reach 10,000° K.

The planet’s most prominent feature is the Great Red Spot, which is easily visible from telescopes on Earth and was first seen in the late-1600s. This feature is actually a giant storm that has been swirling on the planet for hundreds of years, although there are many other storms on Jupiter, which appear as brown or white ovals on the surface. Scientists remain unsure, however, as to what drives these storms; theories range from energy from the Sun to Jupiter’s own internal heat. Astronomers have also observed that the Red Spot appears to be shrinking, from 40,000 km wide a century ago to half that today and it continues to not only grow smaller but become more circular as time passes.

Comments - 34 Responses to “Temperature on Jupiter”