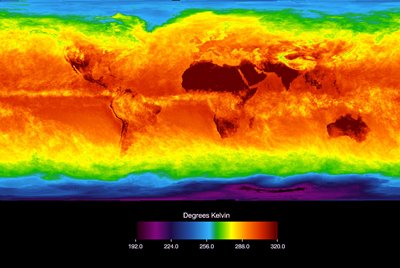 Earth is the most unique planet in the Solar System because it is the only one that can support life as we know it. Its dense atmosphere serves to protect life on Earth by filtering harmful ultra-violet rays from hitting the surface and vaporizing most meteors before they can strike. In addition, the planet’s average temperatures are comfortable enough to support life.

Earth’s life-sustaining conditions are seen as fortuitous. If the planet had been just 5% closer to the Sun; the surface would have been too hot while if it had been just 1% farther the surface would be a frozen wasteland. These small differences may also have saved the plant life that would eventually make the atmosphere livable by reducing the amount of carbon dioxide and increasing the amount of oxygen in the air through photosynthesis.

Average temperatures on the planet have risen by 0.8° C since the 1880s, with the worst increases occurring over the past few decades. In fact, the last two decades of the twentieth century were among the hottest in 400 years. Among the areas worst affected by global warming is the Arctic, which has seen average temperatures rise at two times the global average. This development has led some experts to predict that the Arctic may be totally ice-free summer by 2040, or earlier.

Comments - No Responses to “Temperature on Earth”