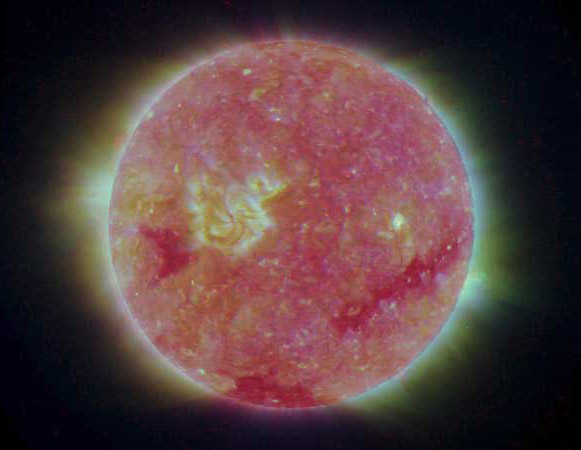 The Sun provides all the heat and energy needed in the Earth as well as the entire solar system. It also generates tremendous energy in the form of light and heat. It is this energy which powers the entire solar system. Can you imagine the high temperatures it exudes to heat the celestial bodies around it? Consider how many millions of kilometers these heavenly bodies are from each other.

The temperature of a star is related to its color. Red stars are the coolest while the bluish-white stars are the hottest. Being a yellow star, the Sun emits extreme temperature but not that high as the white ones. Some stars such Vega and Rigel is much hotter than the Sun. Vega, a white star releases 11,000° Celsius and Rigel, a bluish- white star emits as much as 20,000° Celsius.

The Sun has a temperature ranging from 6,000° Celsius at its surface which is hot enough to turn gold, tungsten and every metal on Earth into gas. It is around 15,000,000° Celsius in its center- far hotter than anything we can generate on Earth. Pressure is also enormously high in its center. In these extreme conditions at the center of the Sun, hydrogen nuclei are fusing into helium in a process called nuclear fusion.

This is the same process at work, in a very tiny scale, in the explosion of a hydrogen bomb. The Sun, therefore, is like a gigantic hydrogen bomb continuously exploding, or a huge nuclear power plant. By observing the Sun using telescopes, astronomers and scientists found out that it is made up of gases squeezed so tightly that its core becomes very hot.

The Sun also burns up four million tones of hydrogen per second. This amount of heat, when converted into energy, would be enough to provide the whole world with all the electricity it needs for over 1,500 million years.

Comments - 6 Responses to “Temperature of the Sun”