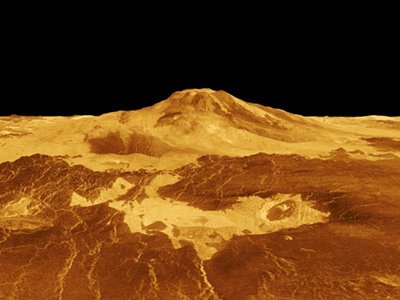 Venus is one of the brightest objects in space visible in the night sky. Knowing its location, Venus is still visible during daytime. Because of its distance from the Sun, a full revolution is shorter than that of Earths’. Upon examination using a telescope, Venus’ surface is covered by a thick layer of sulphuric acid clouds. These clouds are formed because of the volcanoes abundant on the planet. Even if the planet named after the Roman goddess of love and beauty, its surface doesn’t seem to be emanating love because the planet itself looks like a big volcano.

But why is it named after Venus when it actually looks hellish? The answer to that question would be because it is known to have similar qualities to that of Earths’ surface. Volcanoes on Venus are similar to the Earth’s, however, some scientists believe that because the temperature on the planet rose so high up, the tectonic plates stop moving and these plates should have formed the cone or crater shapes the volcanoes on Venus should have that is why the magma on its surface just form a sea like body.

Even though Mercury is closer to the sun, Venus, who only gets 25% of heat from the Sun than Mercury, has a hotter surface. Even among the inner planets, Venus, has the highest level of density and pressure. On its surface, the pressure would feel like someone is one kilometre below sea level on Earth. It’s not survivable even if you disregard the heat from the planet. In our Solar System, Venus is said to have the highest greenhouse effect. Not only is it called the sister planet of the Earth because they have similarities in size and mass but because it is believed that before the Greenhouse effect on the planet took over, Venus’ atmosphere was almost similar to that of Earth’s.

Comments - 10 Responses to “Surface of Venus”