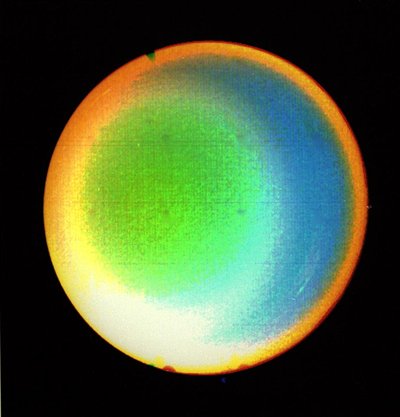 The first planet to be discovered with a telescope is Uranus. But unlike Neptune, Uranus is visible to the naked eye. Albeit its gargantuan size, Uranus is categorized as one of the least dense planets. Because of its low density level, the gravity on the planet is relatively weak therefore the gravity experienced on the planet would only be 89% of what it would feel like walking on Earth. Uranus is gaseous that it doesn’t really have a solid surface.

The surface of Uranus is one of the most fascinating things that one can study. It’s so unique that its atmosphere is actually its surface. The giant gaseous planet has no solid surface and what scientist and astronomers have learned is that the surface is composed of fluids. The whole make up of Uranus being a giant planet is its gases. Yes it is big but not as massive as its other contemporary giant planets such as Jupiter, Saturn and Neptune. Uranus is actually a massive heavenly body made up of ice and gas. Its center which is icy will freeze objects that pass through its atmosphere before reaching the surface.

Like other gaseous planets, Uranus is made up of gases such as hydrogen, methane and helium. There is a large amount of methane on Uranus, the gas plays a great role in giving the planet its color because methane only absorbs certain colors from the light it gets from the Sun and the others are reflected back into space thus giving it the bluish green color. Also, with its make up consisting mostly of gas, the planet is also blasted with winds up to 900 km/h which is almost 4 times the wind of the strongest hurricane known on Earth.

1986 Pictures of the Surface of Uranus

Comments - 34 Responses to “Surface of Uranus”