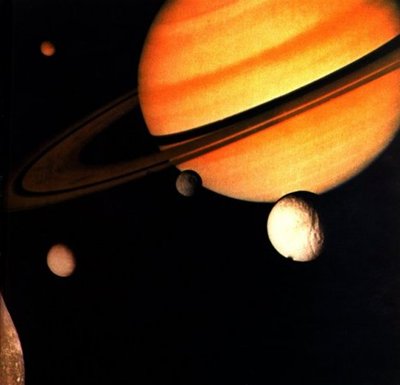 What makes Saturn huge is its atmosphere. Although it has a surface, it is not as solid as other planets. Saturn’s surface is so dense that the gravity on it is particularly very weak and is only 91% compared to that of Earth’s. It will not allow anyone to take a stroll on the planet. The pressure is very high that not only will freezing temperatures turn objects into solid ice but the high level of pressure will crush objects before it hits the surface.

Similar to Uranus, Saturn also has a fluid surface. The atmosphere of Saturn is visible through the telescope, the outer layer of gas. The atmosphere of the planet consists of gases such as hydrogen which makes up the atmosphere by 93% and helium which are the basic gases found on all giant gas planets. Saturn’s atmosphere has three layers of gas and these layers are determined by their temperature. The tropopause is the outer visible layer which is mostly composed of ammonia clouds. Closer to the planets’ surface is the cloud layer made up of ammonium hydro-sulfide clouds. And finally, the layer closest to the icy fluid surface of the planet is made up of clouds of water that drops below 0 temperatures.

The planet named after the Roman god Saturn, much like Jupiter also has a set of rings with objects orbiting the planet independently. Through a telescope, Saturn has four rings, sixty known moons and possibly unknown moonlets that orbit the planet within its rings. Dust and rocky space debris along with gases such as ammonia, acetylene, phosphine and methane, which are considered as trace elements, make up the bands and through the telescope can be viewed and sometimes even with the naked eye as it orbits near the Earth.

Comments - 48 Responses to “Surface of Saturn”