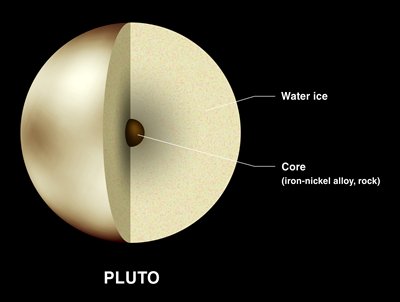 Pluto is classified as the second-largest dwarf planet in our Solar system. However, recent studies have suggested speculation by astronomers that Pluto, is in fact part of the Kuiper belt. This is found in the outermost region of the solar system which is mainly composed of asteroids. This heavenly body who takes its name after the Roman and Greek god of the underworld has a distance of 2.67 billion miles away from Earth, therefore its surface is relatively unknown. However, it is believed that the smallest and coldest planet is said to be composed of 70% rock and 30% ice.

Pluto, like Earth and Mars also have polar ice caps. The polar ice caps are said to have been formed because of the coldness of the dwarf planets temperature which ranges from -235 and -210 C. Up until now, Pluto remains as the only planet in the solar system not to be explored. But through different forms for science and technology, Pluto is known to have gases such as nitrogen, methane and carbon dioxide. The discovery of these gases was during 1985 when astronomers found the planet orbiting. Pluto was passing by a star and has appeared to slightly dim, hence concluding that Pluto has an atmosphere. When Pluto moves away from the sun, the temperature drops and the liquids on the planet form into ice and as it gets warmer again, the liquid evaporates and creates gases.

Because of Pluto’s relatively small size, even smaller than the Earth’s moon and appears like a star to the naked eye, some astronomers believe that Pluto had been one of Neptune’s moon which in some way through time has escaped from Neptune’s orbit. Pluto, though small, has three orbiting moons. Charon which is almost half of Pluto’s size and Nix and Hydra which are named after the Greek goddess daughter of chaos, Nyx and a nine-headed serpent guardian to the underworld.

Comments - 8 Responses to “Surface of Pluto”