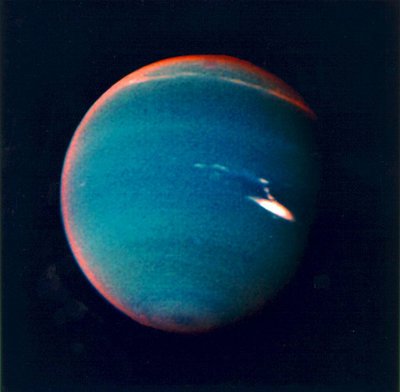 When Pluto passes into Neptune’s orbit during its revolution around the Sun, Neptune the 8th planet from the Sun becomes the outermost planet in the Solar System for a long period. Although categorized as one of the giant gas planets along with Uranus and Jupiter, Neptune’s rocky core is only a bit larger than of Earths, but its overall mass is 17 times more. Because of the gases on Neptune which give off a light blue color, Neptune is named after the Roman god of sea. However, even though Neptune is a giant planet with a distinguishable light blue color, it is still not visible without a telescope because of its distance from the Earth.

This planet has gases similar to that of Uranus. Even though Neptune and Uranus are also categorized as gas planets like Saturn and Jupiter, to make a distinction between them, Neptune and Uranus are classified as “ice giants” because its atmosphere has higher levels of water, ammonia and methane. Other gases in its atmosphere that contribute to its color are hydrogen, helium, hydrocarbons and some believe nitrogen is also present albeit there are very little traces of it. The temperature of Neptune is also one of a kind because it is considered to have one of the coldest temperatures in the Solar System. Liquids will automatically freeze because of its temperature that drops down to −218 °C.

Much like Jupiter, Neptune also has a great spot. A great red spot is on Jupiter, while a great dark spot is on Neptune. The spot found on the lower region of Neptune is actually a storm. Massive amounts of clouds and strong gusts of winds, which reach speeds of up to 2,100 km/h, form that region. Astronomers up until now have no solid information as to how long the storm has been ongoing.

Comments - 15 Responses to “Surface of Neptune”