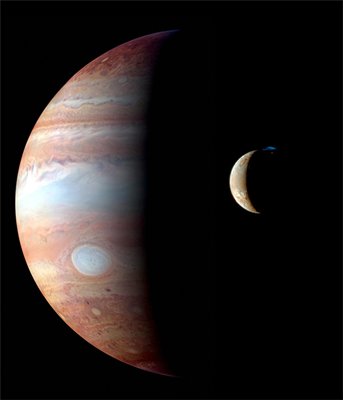 The largest known planet in the Solar System and also the largest among gas planets, Jupiter is named after the Roman god of the same name who is also known in Roman mythology as the god of all the Roman gods. Jupiter, even without a telescope, is the 3rd brightest object in the night sky apart from the moon and the center of the Solar system, the Sun. Aside from being one of the brightest and largest objects in the Solar system; Jupiter is also known to have the same level of pressure as that of Earth. However, because the surface of the giant gaseous planet has a temperature of at least 36,000 Kelvin, exploring the surface on foot or even landing space explorers on the planet is very unlikely.

Because Jupiter is considered a gas planet, its atmosphere is then considered its surface. Jupiter does have a surface but it is not solid and there is still not a term scientists have assigned to it. Unlike other gas planets, Jupiter is colossal with very low density. Jupiter can have as much as four more times its mass but would still remain the same size because the density will rise. Jupiter size or mass is 318 times more than the Earth’s. Another characteristic Jupiter and the Earth share is their shape which is an oblate spheroid or poles that are a bit flattened and has a bulge in its equatorial region.

Aside from being massive and gaseous, Jupiter is also known for its rings and the Great red spot. Jupiter has an orbiting planetary ring which contains gases, space debris and others. Jupiter is also known to have the most number of moons. There are at least 63 known moons. The majority of Jupiter’s atmosphere is made up of hydrogen and a little percentage of helium.

Comments - 12 Responses to “Surface of Jupiter”