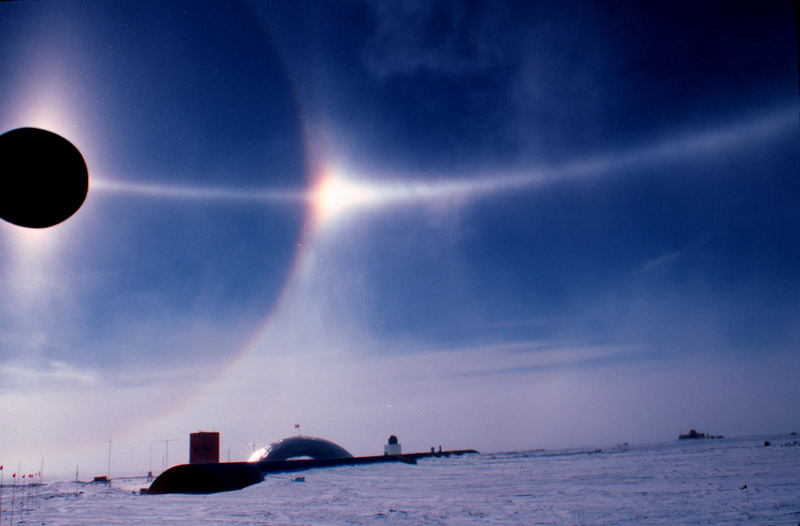 A sundog, bearing the scientific name parhelion (plural is parhelia) which means “beside the sun” in Greek, is also called a mock Sun or a phantom Sun. This is an atmospheric phenomenon that results to the manifestation of bright spots of light in the horizon. It usually appears in the form of a halo or a luminously brilliant ring on either side of the Sun.

Sometimes, a sundog can appear as a colored patch made of light on one side of the Sun. A sundog usually maintains a 22 degree angle from the Sun and is at a distance to Earth similar to the Sun. Sundog sightings can happen during any season and can occur anywhere in the world although they are not always bright or can be seen clearly. The best time to see sundogs is when the Sun is down. This is the time they are most visible.

Usually, sundogs are made of plate-like hexagonal ice crystals in cold cirrus clouds or during really cold weather. They are formed by ice crystals or diamond dust that drift at lower levels of the sky. Acting as prisms, the crystals bend the rays of light that pass through them by at least 22 degrees.

In cases where the crystals are randomly oriented, what will be visible is a Sun completely ringed by a halo. However, in most cases, as the diamond dust descends; they align themselves vertically resulting to horizontal sunlight refraction. Sundogs are then seen.

As the Sun further rises, rays passing through the crystals get more skewed from the horizontal plane. As their deviation angle increases, the sundogs likewise move further from the Sun although they always stay on the same elevation the Sun is in. Sundogs are usually red at the side most proximate to the Sun with varying hues of orange to blue in the outskirts. These colors considerably overlap and are rarely pure. They all merge to the white parhelic circle whenever it is visible.

Comments - One Response to “Sundog”